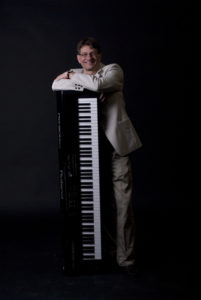 Jerry Coleman began his solo career at the age of 15.  He led a number of popular bands during his early years in music, and was a recognized stand-out on keyboards and vocals.

In 1987 he was hired by Warner Brothers recording artists, The Vogues as a lead  singer (“5:00 World”, “My Special Angel, Turn Around, Look at Me”, “You’re  the One”) and performed with the group for seven years.

In addition to his solo career, Jerry performed as keyboardist and backup vocalist for The Jaggerz famous for their 1970 number one song, “The Rapper”.

From 2014 to 2019 Jerry performed with the Elite Show Band, one of the Country’s premier event and wedding bands.

He has performed on stage with such stars as Frankie Valli, Little  Anthony, Del Shannon, Dion, Jay and The Americans, The Skyliners, The Tokens, The Drifters, The Crystals, Tommy Roe, Lou Christie, Maratha Reeves, Ronnie Specter, Peter Noone and Felix Cavaliere to name but a few.